Yes, the water is heated in the showerhead...

The product Tara calls the "widow-maker." 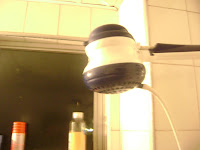 So, another oddity for us here in is the building practices of those in a developing country.

For example, we live in a city of roughly two million people. In this city we have numerous buildings that rise from the city more than fifteen stories with some as high as fifty stories plus. However, no matter how high the buildings, the builders do not use steel beams. Rather, they use concrete beams made on location and bricks to make the exterior walls. I do not know that I have seen a building built in the that high without the use of steel girders.

Also, our electrical system is not what we are use to. The system is like that in the , in that it uses a similar voltage (127 volts here versus 110 volts in the ). However, it seems that Northern Brazilians do not know what it is to ground a house. You know that third plug that many products have in the , well, you can find it on products here but it is of no use for houses and apartments are not grounded. Why you can buy and use three prong outlets and produces is beyond us when they guard against nothing.

Finally, the electrical work in the bathroom is quite different. In the United States, it is required that you have plug-ins in the kitchen and bathroom which have a breaker system that shut off the electricity to protect you since you are close to water (a great conductor of electricity). Not only are these unheard of in Belém we actually have an electrical product, a showerhead, which heats the water which runs through it in our bathroom. Yes, that is what I said, our water is heated in the showerhead. No, we do not have a hot water tank. Some extremely rich people may have one (the same people who have central air-conditioning which is unheard of in homes here). We have only hot water in the bathroom with the special showerheads installed. The strange thing about these showerheads is that you regulate the temperature two ways, one by turning a switch from off to warm to hot and the other is by how high you turn on the water pressure. To take a truly hot shower, you must turn the switch to hot and turn the water on really low but then again, who wants to take a hot shower in an equatorial climate. 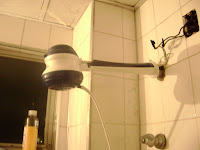 yes, since this picture we have had the electrician put an outlet and plug to make the shower safer.
Email ThisBlogThis!Share to TwitterShare to FacebookShare to Pinterest
Newer Post Older Post Home

Do You Know Him Who Is Able to Save?